Latin American legends often include goblin-like beings. As we mentioned in the legend of the Trauco, the tendency is that they are naughty creatures who have been attributed the rapture and attack of women in the solitude of the forests. On this occasion, we will explore a legend of the Guaraní mythology: the dreaded Kurupí. 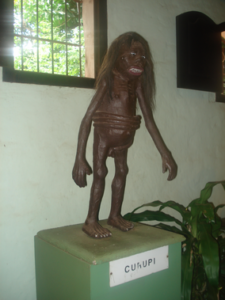 Going into the north coast of Argentina and Paraguay we find a legend of Guaraní origin. The Kurupí is the Fifth son of Tau and Keraná. He is usually described as short, stocky, hairy, with an unpleasant appearance, with indigenous features, and with his feet turned upside down. This last, it is believed that it helped him to confuse who followed his trail. There are those who believe that their limbs do not have joints. However, one of the most characteristic features is his elongated virile member which should roll around his waist. With this, it is believed that he attacks his victims.

He lives in the forests and is believed to be the protector of these. Also, is considered a representative being of fertility and lust. The Kurupí moves among the trees and is believed to be very clumsy in its mobility. Because of this, it would be easy to avoid it, in addition to believing that cutting his phallus greatly weaks him. As it is narrated about the cases of its attack, the Kurupí attacks any type of woman who goes alone in the woods. In some cases, the girl may die and in others, she may get pregnant. There are also two versions of their children. In one of them, it is said that the son dies on the seventh day due to a strange condition while in another version the son born with many traits related to the father.

A Story to Horrify and Hide

There are those who say that this legend was a story to scare and hide aberrant facts that happened daily. The mothers promoted the story in order that their daughters did not go into the forest by herself. Likewise, the story could be used to explain the cases of single mothers that, with the fear of receiving social rejection typical of the conservative society of those times. Finally, this story could also hide the fact that many men roamed the forests and abused women who abducted and raped for their own satisfaction.

On the other hand, there are those who confirm that there are creatures like him in the forests. Many cases of goblins in the forests have been narrated who appeared mainly with women and children. These cases cannot be clarified with the aforementioned facts since their intentions are very different.

Being this case a legend, I think it is important to study its history and evolution over the years as it is the first descriptions of goblins in the Latin American sector. These creatures still star in several of the reported cases. Therefore, I consider it important to know the legends to generate perspectives on current cases. The Kurupí is very similar to other legends of a similar phenomenon such as the Trauco and the Pombero. For now, determining an answer based on the legend and current events is an act that is left to the discretion of each reader.

Do you know a case of Kurupí? Share your comments below

Friday August 16th, 2019 Miosotis
Brief description of the mythological creature There is a creature named Kraken in Scandinavian and Finnish mythology. It is a
Cryptozoology Legends

Monday September 2nd, 2019Saturday August 31st, 2019 Miosotis
Description of the Ahuizotl This cryptid comes from the Anahuac culture, specifically from Mexican mythology. It is described as a
Legends Mistery Uncategorized

The Siddhis- Perfections or distractions on the meditation practice

Wednesday July 25th, 2018Saturday July 28th, 2018 Aergoth
Meditation, for those who have it as part of their lifestyle, is a practice of improvement and recovery. Through practice,

Are Hurricanes Irma and María created by Men?

The Beginnings of OVNIS Sightings in the World

The Marvelous Correlation between the Brain and the Universe