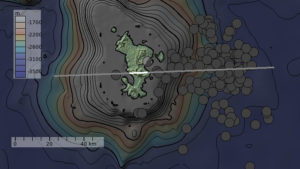 The island of Mayotte, located between Africa and Madagascar, has moved 6 cm to the east and 3 cm to the south. Several theories have emerged to explain the seismic signals registered from Canada to Kenya. It was a mysterious seismic wave that traveled the planet for 20 minutes starting at 4:30 A.M. from November 11.

The first initial heartbeat was detected about 15 miles off the coast of Mayotte. From then on, the seismographs vibrated in Zambia, Kenya and Ethiopia. Then it crossed the Pacific and Atlantic Oceans and there were records in New Zealand, Hawaii, Chile and Canada.

Only a geology enthusiast, identified as @mataripax, was the one who warned about the mysterious zigzag signal on the seismic map of the US Geological Survey. After that was joined by other observers and commentators from around the world.

It has been a subject of interest for the experts and they have not yet been able to find answers due to their remarkably rare characteristics, from their surprising monotony to their dispersion throughout the planet.

Comparison between the Mayotte seismic wave and other earthquakes

The waves that are detected by the shake is called the wave train. Those that travel more quickly are the P waves, by primary (those that move in group) and then arise the S or secondary waves, which are those that move from one side to another. Both are high frequency so an earthquake must have occurred before they could be detected.

Only at the end is when emerge the low frequency surface waves, equivalent to the last resonances, before it become silent.

The strange thing about the signals that the mysterious Mayotte seismic wave emitted was that they had low frequency surface waves, but they were not preceded by P or S waves. In other words, so they were only languishing echoes of an earthquake.

Possible more convincing causes of what happened in Mayotte

Since the month of May, hundreds of earthquakes have been recorded shaking the seas of southeastern Africa. Mostly they were light tremors with an epicenter 31 miles off the coast of Mayotte. The most significant was registered on May 15, with 5.8 degrees on the Ritcher scale.

According to the “Bureau Recherches Geologikes et Minieres” it is indicated that it is due to the formation of a new focus of volcanic activity in the area, which is even literally moving the island. We must consider that Mayotte is precisely the result of an eruption that occurred 40 centuries ago. The BRGM attributes what happened to magma displacements in the deep sea miles from the coast of Mayotte.

The Mayotte GPS stations detected in mid-July that the island had moved 6,096 cm to the east and 3,048 cm to the south; according to data provided by BRGM.

According to Helen Robinson, the signs are “strange” and also are too nice and perfect to be the work of nature. Although she adds that there is no evidence that there is any industrial source making deep drilling in the Mayotte coasts. So according to Robinson, it is very difficult to say what is the cause and what is the correct theory.

Actually and since ever, earthquakes and those of low magnitude have always occurred, but the surprising thing about this issue is how the location of an island has been affected and how the seismic wave has been deployed all over the planet. Without losing sight of the fact that it has not happened the same as in other tremors or earthquakes.

Although some explanations have been given of what happened, the question remains among several of the experts since they have not been able to explain without a doubt what happened. Here only the data is exposed and the opinion or conclusion is left to the discretion of the reader.

Submerged city on the western coast of Cuba

Wednesday January 16th, 2019Tuesday May 28th, 2019 Miosotis
Archaeological finds on the coast of Cuba About a decade ago, explorers were conducting a study on the western coast
Ancient Myth Bible Mysteries Legends Mistery

Lion-like men of Moab- A creature of Bible and Myth

Thursday June 28th, 2018Tuesday April 23rd, 2019 Aergoth
Since ancient times, we know about stories of mythical creatures in every part of the world. We often take these
Mistery Uncategorized

Thursday February 21st, 2019Tuesday February 19th, 2019 Miosotis
Beginnings of the mysterious Philadelphia Experiment It is believed that everything began in 1939, when scientists were interested in the

Boriska, the child of Mars

Tenerife, a mythical place of ufology