Our communities are full of legends that tell stories of events that we can not explain. This happens in La Llorosa Bridge of the neighborhood Asomante in Aibonito. Currently, it’s difficult to find images of the bridge (often mistaken with the Mavillas bridge in the town of Corozal) or even find the location on a digital map (Google Maps). However, the versions of the legend are documented and agree that around midnight a baby crying is heard.

The story of Blisinia and Lorenzano

Blisinia lived in the Las Abejas sector of the neighborhood Asomante in Aibonito. She worked and took care of his parents. One day she met Lorenzano, a boy looking for work in the tobacco plantations and with the one she fell in love. Lorenzano had problems with alcohol and spent all his money on it. On a Friday night, Blisinia ran away from the house with him to the coast. Time passed and Lorenzano abandoned her expecting a son. In such circumstances, she decides to return to her parents’ house where she had her son and that is the end of that chapter in her life.

With the caring of her parents and son, her life became quite complicated. She had to leave the house early with the child walking to the town and then return very late at night. On one occasion, around midnight she was passing by the bridge and decided to rest there for a few minutes. She placed the baby by his corner while looking for some food for him. He failed to notice in time and the baby slipped out and fell off towards the river. The currents dragged him and she had no chance to save him. This event devastated Blisinia and began to frequent the place at midnight crying for her child. This is how she spent his last years.

Then it is said that Lorenzano returned to the town looking for Blisinia. When he didn’t find her, he decided to return at nightfall, passing by the same bridge, and he found a baby crying. Lorenzano went down to help him and give him something to eat when he noticed that the baby had fangs. This terrified him greatly and fled.

The story of the drunk man

It is said that on one occasion a drunk man passed by the bridge by midnight. As he passes, he notices a baby crying and decides to help him. When he comes down, he takes some bread and chews it a little so that the baby can eat it. At that moment he realizes that the baby has sharp fangs and he speaks to him. It is at that moment that he throws the baby and flees the place thinking he was the devil. The next day he goes to church and stops drinking.

The baby with fangs

The versions change one detail for another but all agree on the appearance of that baby. If we analyze the stories we can think that one is part of the other because Lorenzano was an alcoholic and perhaps the story of Blisinia was not necessary to explain the appearance of the baby. On the other hand, we can also think that they are isolated cases and then it seems that the baby appears at midnight to the drunks who pass by there.

In short, it is very difficult to draw a line between what is a fable and what really happens here. In addition, as we have seen in other cases (see The False Virgin in Morovis), the information is “encapsulated” among its connoisseurs and it is less the details we can find about it. For some reason, it is sought that these stories wanted to be forgotten. 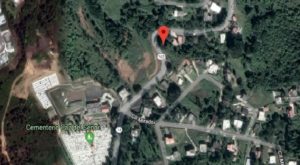 Do you think the legend of La Llorosa is true? Do you know any other legend or story related to baby with fangs? Leave your comments and opinions below.

Monday September 2nd, 2019Saturday August 31st, 2019 Miosotis
Description of the Ahuizotl This cryptid comes from the Anahuac culture, specifically from Mexican mythology. It is described as a
Ancient Myth Bible Mysteries Legends Mistery

Lion-like men of Moab- A creature of Bible and Myth

Thursday June 28th, 2018Tuesday April 23rd, 2019 Aergoth
Since ancient times, we know about stories of mythical creatures in every part of the world. We often take these
Legends Mistery

The Ctones, myth or reality

Monday May 6th, 2019Sunday May 5th, 2019 Miosotis
Events related to the origin of the theory of the existence of the Ctones The mine near the Chinese city