The apparition of supernatural entities is numerous when we do our research. Some of them can bring positive events while in others the consequences can be regrettable. In this case, faith was put to on test for a Christian community that received a strange apparition.

The apparition of a “Virgin”

In the decade of the 80’s, the community of Franquez in the town of Morovis experienced a series of paranormal events. It all started when a young man from the neighboring neighborhood, along with another member of the church, was visiting one of the grounds where the Easter Youth was celebrated. It was there that they saw, in the shade of a tree, a lady who had her back to them. They associated her with the Virgin Mary since she asked them to pray there.

The news generated commotion in the town, and soon there were many who went to that place were apparently appeared the Virgin. The Church treated this case with skepticism and was distant. Every day more people visited the place. The faith of the Christians was put to the test when it began to generate a certain fanaticism. This caused them not to question their next petitions.

The Revelation of the “Virgin”

The Virgin began to call them to pray in that place at the mass time and the Church attendants began to decrease. For a Catholic, the Mass must be the highest act since in him the Eucharist is received, the center of all his religion. All the other sacraments are ordained as the end of this. The request disarticulates their own faith, but the sensation of the event did not allow them to see it. It should be noted that this caused some controversy among the skeptical Christians who questioned the intentions of this apparition.

The insistence of this group of followers of the “Virgin” was so intense that the priest spoke with the first ones who saw her. The priest questioned him about the inconsistencies in her requests and the fact that his face was always hidden. He entrusted them to ask the Virgin in the next meeting to show her face. As the priest had indicated, in the next meeting they made the request to the Virgin. The lady, in presence of all the people who were there, agreed and revealed what everyone saw as a demonic face. 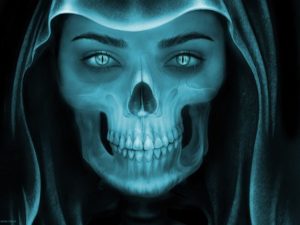 The impression was terrible, so much that those who attended the place began to act differently. Many had to be admitted to psychiatric facilities. Exorcist priests had to intervene constantly. In some cases, it was whole families that seemed to be possessed. When they visited the houses, the eyes of religious images were cut off. On one occasion, during Communion, one of the possessed ones approached to receive it and just before arriving at it, he fell to the ground. The tree where this entity appeared suddenly dried up and the trunk became as white as ashes.
These were only some of the events that occurred as a result of the apparition. The events described here marked many lives in the neighborhood of Franquez de Morovis. It was so shocking and controversial that it appeared in the country’s news media. After a few years, it has questionably disappeared from historical data. This case could have become a mere legend if it were not for the number of people who lived through this experience and can tell about it. However, it seems that it is a story that wants to be forgotten in the community.

* The names and descriptions that allow in some way identify the protagonists of this case have been omitted.

The apparitions are not an issue of past eras. These paranormal events somehow bypass our blunt test requirements to determine a fact as true. On the other hand, we should not discard the inconclusive evidence that exists and leave us in the mystery. Appearances, like many other paranormal events, must be treated objectively. We must look beyond the supernatural “miracles” and see the fruits of that event. Thus we can overcome the tests presented by these challenges.

Do you more information about these case or another related? Make your opinions or comments below.

Monday July 30th, 2018Friday July 27th, 2018 Aergoth
The stories of apparitions of specters are numerous. Many of them are linked to myths of the region. In the
Apparitions Paranormal

The headless priest- An apparition of Latin America

Izamal and their spooky legends

Monday April 1st, 2019Sunday March 31st, 2019 Miosotis
Brief description of this picturesque town Izamal is a town in Yucatan where there is a lot of paranormal activity.

Conspiracy Theories on the Assassination of John F. Kennedy

Bilocation, to be present in two places simultaneously

The Mysterious Seismic Wave of Mayotte