As we have seen in a past article, much has been argued about the possibility that climatic phenomena are being manipulated by man. This theory can be assured because the pollution and destruction of our nature have exerted changes in our environment. Hurricanes have been increasing in recent years. However, the aforementioned manipulation has certain conspiratorial interests. Now we will mention some theories in which it is alleged that our atmospheric phenomena are being manipulated by man.

Pulverized Chemicals and the Chemtrails 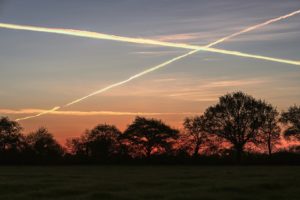 One of the tools considered as geoclimatic technology is the alleged use of pulverized chemicals in the sky, better known as Chemtrails. While many scientists say the trail of clouds is leaving some aircraft condensation product, others claim that these are chemicals released into the atmosphere for certain interests. Among the effects mentioned are increasing rainfall, creating droughts and even spreading diseases between communities and their environment.

It should not surprise us that this theory generates so much argumentation since there are facts that allow us to consider this possibility. The use of chemicals to increase rainfall is not a secret. In the practice of cloud seeding, chemicals that are used are allegedly harmless to humans. The results of this practice have not always been effective, altering unfavorably in certain cases. We must not forget the use of geoclimatic weapons in the Vietnam War where they extended the rainy season. This disfavored the country plunged into war.

On the other hand, there is a different dimension in the apparent methods of climate control. In the early 1900s, Nikola Tesla worked on a number of inventions and advances that we are just enjoying. When he died, in times of World War, all their documents were confiscated by the government for the alleged fear that enemy nations could get some benefit. Among those documents, it is alleged that there were plans of what could be used as a climate control machine. This theory is possible since, in 1915, Tesla published an article for Manufacturer’ Record where he claimed that the day would soon come when we have full control of atmospheric precipitation and that day we could take unlimited amounts of water in the oceans, any amount of energies and transform irrigation methods in agriculture. It is alleged that this was possible by transmitting energy through the troposphere from one tower to another.

Likewise, we see transmission methods that for many is the current threat of climate manipulation. The HAARP project stands for the High-Frequency Active Auroral Research Program and is a scientific-military program that investigates the ionosphere as an objective to improve radio communications. The program allegedly transmits high-frequency energy to the ionosphere. This facility can be visited during the year in Alaska and its investigations are public. In spite of this, there are those who affirm that the real operations in HAARP are directed to other ends. It is believed that the transmission of energy through the ionosphere generates effects not only on the climate but also on Earth itself causing any kind of natural disaster. Many believe that HAARP is the US weapon to control the global climate.

The Orgon energy and the “cloud-busters”

Below I present a video where said device is used:

We know with certainty that there are a variety of theories that suggest that indeed we have mechanisms geo-climate control. Despite this, the conspiracy around climate control still lacks more evidence than affirm it. We can suggest the case of Operation Popeye during the Vietnam War but even so it has not been revealed at present who may be manipulating our environment and for what purposes. This should make us think about the possible theories that consolidate the rumors surrounding this mystery.

Do you think that our weather is being manipulated? By which mechanism they accomplish this purposes? Share your opinions below.

The Ctones, myth or reality

Monday May 6th, 2019Sunday May 5th, 2019 Miosotis
Events related to the origin of the theory of the existence of the Ctones The mine near the Chinese city
Cryptozoology Mistery

Uncertainty about the close passage of an asteroid in November 2020

Wednesday November 4th, 2020 Miosotis
Suspicion and skepticism about NASA's announcement regarding the near passing of an asteroid NASA recently announced the passage of a

Sea Serpents – a mystery of cryptozoology

The Legend of the Burials