It is called Gnome of Girona to the body of an animal or animal fetus found in Gerona, Catalonia (Spain) for the month of September 1989. It was not until 1993 that the interest of different media regarding the finding arises.

His skin is bluish and with spots on the face and neck. Its size is approximately twelve centimeters. It has long ears, reddish eyes, a bump on the forehead and its snout resembles that of rodents. Membranes are observed in the fingers of their limbs or claws.

History related to the event 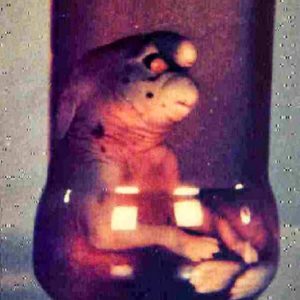 It is said that the cryptid creature was found 11 kilometers from Girona, en route from Banyoles to Olot, by some hikers who were in the forest. It is alleged that it tried to flee quickly until he was hunted. They claimed that it emitted a kind of shriek resembling the laughter of an old man.

According to the story, the being was alive for 24 hours (others say four days) after his capture. It was delivered alive to the Spanish parapsychologist Angel Gordon. This parapsychologist kept it in a bottle of formalin after it died.

Both the U.S. pathologist, John Altshuler, and the Spanish doctor, Luis Linares de Mula, after several tests, determined that it was not a normal fetus of an animal.

However, there are others like the researcher Pedro Palao and the biologists of the Zoo of Barcelona who claim that it was only a montage and that the being could be a fetus of a ruminant.

There is another researcher, Francisco Contreras, who alleges that the hunters mentioned in the story never existed and that the animal was found by Manuel Tello, a neighbor of Gerona. He alleges that Tello put it in the boat and made the photographs.

Given the variety of versions, there is a doubt whether if it is really found a cryptid. However, the data is exposed so that the reader judges and reaches his own conclusions.

Monday July 29th, 2019Friday July 26th, 2019 Miosotis
Data related to the findings The body of an alleged cetacean appeared on a beach on the island of Sajalín
Ancient Myth Cryptozoology Legends

The Yeti, the legend of the Snowman

Tuesday February 5th, 2019Sunday January 27th, 2019 Miosotis
Description and Historical Findings The Yeti is described as a bipedal being that walks inclined towards the front, which has
Cryptozoology